Questions about HCD and scaling?

Do you have questions about HCD and scaling? Perhaps about how to bring such contextualized, nuanced solutions to scale in other communities, or how to use HCD mindsets and approaches to scale up your solution, please post them here and we’ll respond to them!

Q: What is the difference between growth and scale?

Before this session, I had expected that growth and scale could be used interchangeably - I had know idea I was using the term “scale” completely wrong!

Growing typically involves adding resources at around the same rate as adding impact or revenue. If an organization has increased reach to more people, more cities or even more countries, but its operating costs have gone up in a generally correlated way, then what it has really done is grown rather than scaled.

Scaling differs in that it involves adding impact at an exponential rate while adding resources at only an incremental rate. Finding ways to have a greater impact whilst keeping the costs and resources down.

They are not mutually exclusive – one can start with growth and move to scale when ready and able to! 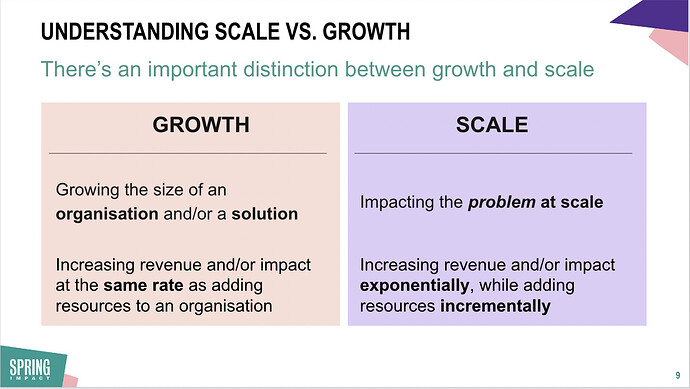 .
.
Here is a helpful visual from the first session on growth vs. scale: 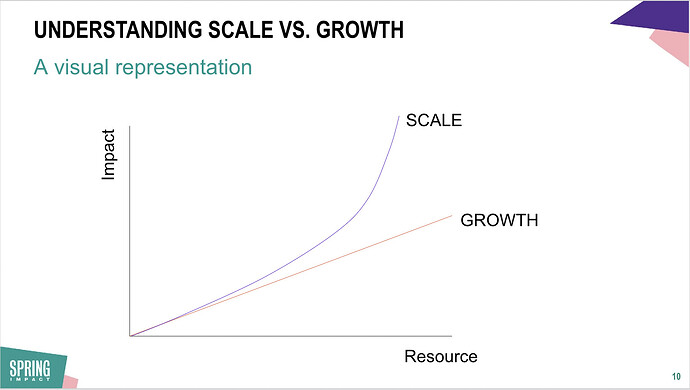 Q: When scaling an HCD intervention, do you have to go back to sort of starting from scratch when you’re approaching a new population?

With human-centered solutions, what works for one population might not work for another even within the same country. Does scaling solutions include going back to the problem and understanding the context of the new population that you’re scaling into?

The short answer is yes, it’s really important that you’ve got that context of how problems are really manifesting themselves in different areas. It is important to hone it and be really critical about what bits really need to exist and where can there be flexibility.

I think the second part of the question is about understanding how the problem exists in other contexts. In an ideal world, everyone would have enough time and resources to understand a context that they are less familiar with and to do a deep dive into how that problem really exists. But for me, this links back to that collaboration piece where are there other organizations and potential partners working in those spaces. If you want to deliver that solution in another context, who is working there already who exist to tackle that problem? What can they teach you? Could they potentially be adopted as a solution and kind of take on that next level of the design process to contextualize it?